I have a series of letters mailed to my grandmother Leota VanScoter from her friend Mary Strickland in the years 1918 and 1919. My grandmother was born in February 1898. There is much interesting history here. A photo of the letters: 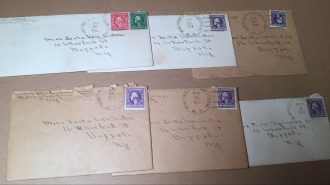 Note my grandmother is located in Buffalo, NY and the letters from Mary are mailed from Whitney Crossings, NY. Whitney Crossings was not actually a town but a post office location at the Garwood station of the railway in Allegany County, NY. Garwood station was named after a business man, whose business led to the need for a railway station. See below for more information. (Also see here in a history of Allegany County if you can’t read the below.)

My grandmother’s family (Leota’s dad was Frank Miles VanScoter) had a summer home in the Garwoods area. Frank was a conductor on the railroad. I have his 1890’s railroad manual, which I will share in a future post. The VanScoter family took the train to and from Buffalo and Garwoods. Remember that automobiles were still not commonplace, and I am sure the family was partial to the railroad since Frank was a conductor. In fact, my dad says he was told that Frank did not think the automobile would be a success. Frank died on Christmas Eve 1919, so he did not live to see the automobile take over.

The photo on the left, from Leota’s album, I include because you can see a Garwoods sign in the background. This photo was not labeled, and I am not certain of the identity of the two young women. On the left may be Ethel, who is Leota’s younger sister. I feel fairly certain it is Ethel based on other photos, but the photo’s quality makes me hesitant to state so with certainty.

Based on perusing the 6 letters written to Leota from Mary, they were good friends. In one letter, she mentions that there is no flu in Garwoods. Remember that 1918 was the year of the terrible influenza pandemic! More here. She also mentions local boys returning from across the pond. Remember that the US entered WW1 in 1917. Mary shares that she got a job as a station agent at Garwoods. Below is one of the letters.

“It was a shame that Earl put his car in for the winter but then he saved gas. No loss, but some small gain! He will have just that much more to start keeping house on in the spring. Am I not right? I mean cash, not gas to keep house on. Ha! Ha!”

Earl is who Leota married on March 3, 1919. In the first photo of this post, you may have noticed the name changed on one envelope from Miss Leota VanScoter to Mrs. E.W. Spicer. Below are photos from the summer of 2018 of Earl and Leota and…the car. There are lots of these shots. Having a boyfriend or fiance with a car was, at that time, very exciting I am sure! The photos are not high quality in the original, so the lack of clarity is not my scanning ability, even though I do lack technical aptitude!

My dad says he was told that their courtship was strictly monitored. They could not be alone, and Frank kept an eye on them if they sat in the parlor or on the porch. Sister Ethel accompanied them on a drive to Niagara Falls. Last photo below is at Niagara Falls. 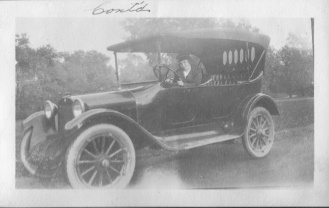 1 thought on “Letters from exactly 100 years ago, including photos”